Debates for cancellation of Konal’s award 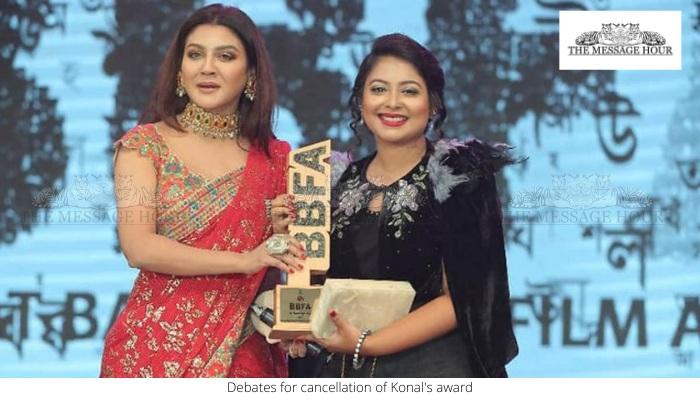 Controversy is raging in the film industry over the National Film Award for vocalist Konal. Prominent people have questioned how it is possible to get a prize by singing a song of fake words and melody in a few lines. Many also demanded the cancellation of the award.

Concerned neo-hippies and their global warming, I’ll tell ya. Which violates copyright law. And with state-recognized recognition of such songs, some of the creators, including copyright law, have been made much smaller. They also said that singing this song has encouraged the use of other people’s songs without permission. বাংলায় পড়ুন

Distinguished director Delwar Jahan Jhantu has raised questions about Konal receiving the award. He said in a video message that perfect people are never hired for the National Film Awards. I have seen it so far. In my opinion, there will be two photographers on the jury who will judge cinematography and two good music directors who understand music well and have an idea about the songs of that subcontinent. If there should be two good lyricists then the issue of awarding is determined correctly. Lyricist and composer Ahmed Imtiaz Bulbul hit song “Tumi Amar Jibon Tumi Amar Maran”. The melody and lyrics of this song used in Bir movie are fake. Konal won the National Film Award for his use of this song in the movie Bir. How to get a national award? He also said that if two lines or one line of a song carry the same meaning, then the song is no longer original. For example, suppose I know Rabindranath, I know you, Ogo foreigner. If I insert this one line in another song, then everyone will say that it is a song written by Rabindranath.

Regarding the award to Konal, producer MD Iqbal said that the lyrics of this song are fake. I have done the music of the song from India. So how does Konal get the prize for this fake song? In my opinion, this song Konal never deserves an award. Because I never support injustice. Songs with fake lyrics never deserve to be rewarded. If it is an original song or a new song, he can get a prize. But not fake songs. Another question that comes to my mind is when did Runa Laila Madam get the award for this song when the song was released in 1986? As far as I know, he did not get the award. And if he gets the prize, will he be given the prize twice for the same song? However, I know that Runa Laila did not get the award from Madam. So Konal Runa Laila is a bigger artist than Madam? He threw this question.

In the movie “Ignorant Heart” you are my life I am your life. A new song has been made for the movie “Bir” with the bridge line of this song The song is written by Kobir Bakul. Imran and Konal sang the song in a musical arrangement by Indian music director Akash Sen. The song was critically acclaimed shortly after the movie was released. And now that the song has won the National Film Award, there has been a storm of controversy over Konal.

However, vocalist Konal did not comment on the criticism. The name of the song has been written in the notification issued by the Ministry of Information. However, the song Tumi Amar Jibon has been released on Shakib Khan’s SK Films YouTube channel. It is worth mentioning here that Runa Laila and Andrew Kishore sang the song titled Tumi Amar Jibon by Ahmed Imtiaz Bulbul. And the song is used to fool the heart. From that song, Konal won a National Film Award for singing a new song with a bridge line piece.